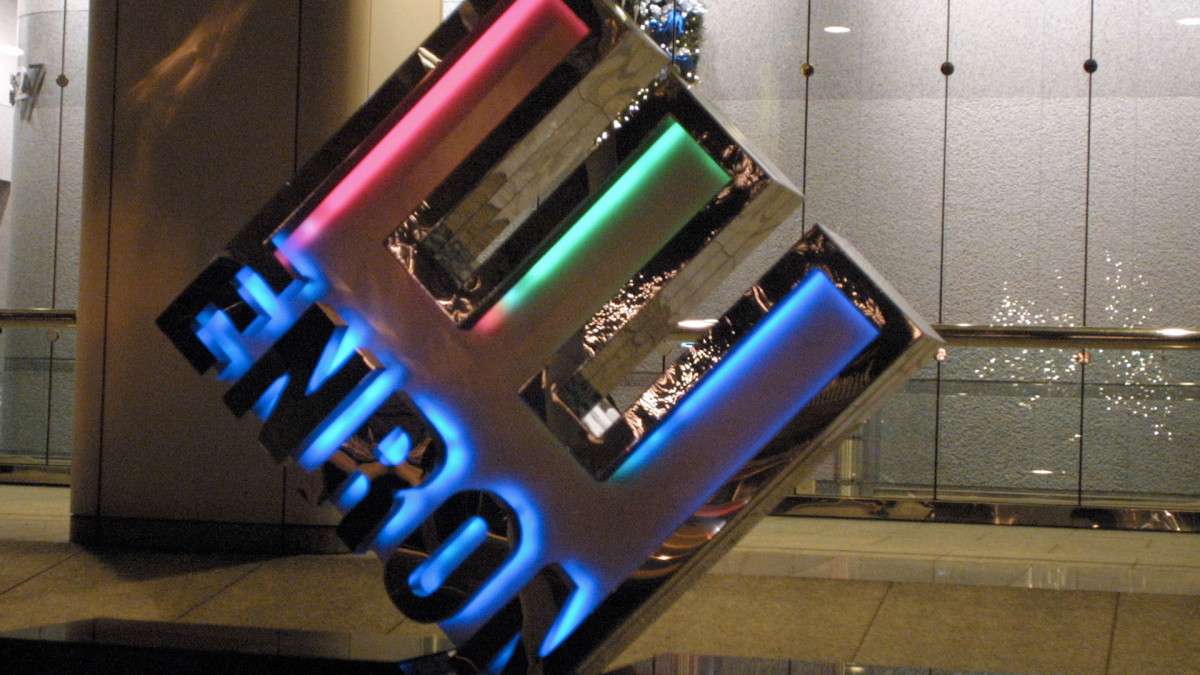 Enron and Hype and Hubris

I hate hype. I learned this early from my parents. They each had a form of zero tolerance for inflated presentations. My mom can spot a phony a mile away and has been known to say things like “if you have to work that hard at appearing nice you’re definitely hiding something.” I’ve seen her stop bullshit from twenty feet away with one raised eyebrow. My father thought one of the worst trials of life was being caught by a salesperson. Pity the person who tried to sell him anything. The more exuberance exhibited the less likely a sale. One enthusiastic fellow, pumped up by a beginners course in how to win friends caught him one day and inflicted a presentation on my father. The merits and virtues of an electronic paper cutter. My father listened and afterwards asked the man to review the warning bell and the “completed job” light indicator. Dad then walked to his desk and got a card to give to the salesman. “Go see this fellow (his competitor). He’ll buy anything with a bell and a light.”

Victor, my son, wears the exact same expression my father did whenever he’s being “sold”. When he asks a question he wants information and the more icing there is the less he wants the cake.

I’m more likely initially to listen, to believe, to wonder “is there something to this?” Entertain the possibilities. I tend to think that getting to truth requires dealing with with contradictions and nuances and complications – shades of gray. I will weigh the ambitions and intentions of everyone involved. Dwell on how to make every exchange a win-win or at least a useful lesson that leaves relationships intact. I’m grateful for my family of skeptics. I can get into trouble on my own.

When Enron imploded, it became, for Houston, a grand morality play. A tragic drama. Of loss and greed and hubris. I say “for Houston” because so many of us knew or had at least met the players. We’d been to their events with friends. Thanked them for their gifts to our favorite nonprofits. Bragged about their dominance and celebrated their “platform innovations”. Chuckled over their arrogance. “The smartest guys in the room.” Hmmm.

When their arrogance and sociopathic greedy gamesmanship blew up the company and the dominoes began to fall, we debated about who was the real villain. We argued, was it really Skilling or Fastow? Did Ken Lay *know*? He was a good guy wasn’t he? I mean, we *knew* him.

We were trying to reconcile behavior and what we thought we knew about these people wirh the wreckage they had caused.

Ken and Linda Lay gave. They gave not only to the “ball gown” charities but also to the unglamorous stuff like child care subsidies and community centers (you know, the ones without a golf course). They remained accessible in the way Houston billionaires often do and believed they owed the city caring concern. Their circle of friends included a lot of people who weren’t members of the ROCC. (River Oaks Country Club)
As the collapse came many of us argued naively that Ken didn’t know. It was those other guys. Jeff and Andy. They did the dirty stuff when Ken stepped away. Then there was the video of Ken pumping the stock to employees, telling them not to sell. And their hopeful, anxious, upturned faces believing him. The down to earth straight shooter. One of the good guys.

Just before his trial began I saw Ken at his table at La Griglia, one of Houston’s favorite “see and be seen” places. Where people regularly “work the tables” handshaking and hugging their way around the room. You can barely hear yourself think in there, but it doesn’t matter because no one’s listening. They’re too busy looking over the shoulder of their dining companion to see who else is there. I like the place a lot. Entertaining. I digress. The Grig has that effect.

Ken was lunching with his defense attorney. The room was quiet. Two months before people would have been giving eye signals to their table mates. “Look who’s here. Let’s go over.”

But no one was getting up. I felt sick. Here was a person we’d all admired, whose favor we had sought out. Someone we celebrated. Jostled to be photographed with. Now here he was in a world of trouble, having caused irreparable devastating harm. What now? I got up to go over because I didn’t want to live with the image of my own hypocrisy. Hello Ken – it’s rough times. Blah blah. Didn’t know what to say at all. Wanting so badly to scream WHY???! He thanked me for stopping by. Told me how important he believed my work to be. Afterwards, I sat in my car and cried for all the people he had harmed and for all the good lost. And for our city.

A week later I got a letter from Ken. I saved it.

We are all flawed. At the center of these dramas are human beings telling themselves stories. Hyping their version of the truth.Truth can be hard to come by. When bells and lights are all we see and hear.
From ancient times until now, from the time we could write our stories until we disappear from the earth, we will write the stories of hubris. Falling from grace. Pride and greed and hype and our hunger to own it all. And the destruction these failings cause.

The story of Enron is not a story of financial misdeeds. It’s an epic tale of what it’s like to be tragically flawed, caught up in the fame and game, blinded by lights, deafened by applause.

PS:
The role of 9/11 in exposing Enron. Disasters, whatever their origin, shake away illusions. Expose mistaken beliefs. When the market plunged post 9/11, there was the Emperor Enron. Naked.